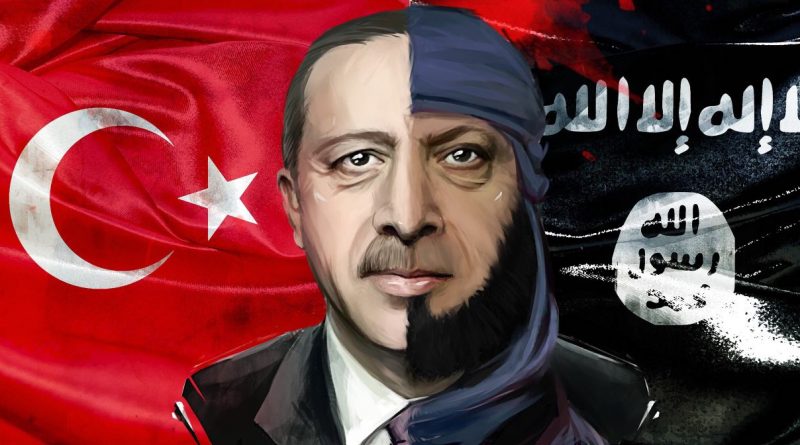 The statement of the communist party of Iran (Marxist-Leninist-Maoist)

The military offensive of the fascist state of Turkey against Rojava ( Kurdistan of Syria) and the autonomous region controlled  by the People’s Defence Units (YPG) is indeed  an act of genocide to eradicate the Kurdish people of the area. The fascist republic of Turkey to fulfill its main objective against the Kurdish nation, has extended this war beyond its borders against the Kurds of Syria, as well. These are the crimes pouring out of the Erdogan’s “Spring of Peace”.

A number of cities and villages in northern Syria have been hit by Turkey’s air and artillery attacks, and many targets including  Syrikani (Ras al-Ayn) and Gary Espy (Tell Abyad,) have been bombarded. The Turkish government says it is seeking to create a “safe zone” along the border and aims to drive out the Kurdish forces affiliated with the Democratic Union Party (DYP) labelled as “terrorist groups”. Erdogan and the Turkish government have turned more than four million Syrian refugees residing in Turkey into an instrument of their fascist policy.

This aggressive occupation is not just against the Kurds in Syria. Through this war Erdogan is trying to respond to the extreme dissatisfaction of the Turkish people against him and his AKP party, by launching more aggressive attacks against his opponents including the Kurds and non-Kurds, under the pretence of “National Security.” Since the beginning of these attacks , various opponents  Erdogan,  including , opposition political forces, intellectuals and unions etc, have declared their opposition  against this war. The People’s Democratic Party (HDP) a party within the Turkey’s power structure, has called for a broad coalition unity against Erdogan;  meanwhile Erdogan has also called his supporters out to defend his party’s policies.

This attack was carried out with the green light from Trump and blessing by Iran and Russia with some ifs and buts nevertheless tacitly gone along with it- but posed to take the most advantage of the situation. The Syrian National Army formerly called “Free Syrian Army” comprised of former officers of Bashar Al-Assad, mercenaries of the Security and Turkish Army (MIT),  have welcomed Ankara’s decision to invade Syria. In a statement issued Wednesday, this group stated that “The Kurds have left us no other choice” and issued the decree to forces under their command to “Hit them with your strong fists and pour your fire at them, make them taste hell.”

What we are seeing in the region today is the expression of the contradictions arising from the heart of the global capitalist system and the reaction of the imperialist rulers, especially American imperialism, to these contradictions. These wars (of empire) which have slaughtered and displaced several generations of Kurds, Arabs and others in Iraq, Syria, Afghanistan and Yemen that  have filled their lives with horror and fear, is indeed hallmarks of all contradictions of the time we live in. The US government, no matter what faction is in the White House, has never taken the side of the Kurdish people regardless of  its off and on  conflicts and disagreements with the Turkish government. The reason is that the Republic of Turkey is part of the structure of the rule and hegemony of American imperialism, and in general, the Western imperialists in the Middle East.

Trump shamelessly tweeted that. ” Now the Kurds are fighting for their own land so that you understand…they did not fight for us in the World War II and they did not help us with Normandy.” The history of US imperialism’s relationship with the Kurds is full of lies and betrayals. United States goal has never been about the triumph nor the right to self-determination for the Kurds. The US has repeatedly betrayed the Kurdish nation and the bourgeois political forces and has used them as an instrument to bolster its own relations, as a backbone  and   pressure on the governments of Iran, Iraq, Turkey and Syria. Cooperation between the Syrian Ba’ath government at the time of Hafiz al-Assad, the CIA, Israel’s Mossad and MIT (Turkey’s security agency) for arresting Abdullah Ocalan was one of these deals. In the current situation, the ominous shadows of these bloody deals are visible once again.

In the Middle East today, any political movement that wants to be the people’s movement and serve the people it claims to represent, must do its utmost to avoid the vortex of coalitions and deals with the imperialist powers (the US, Russia, China and the European Union) and consequently, should avoid deals with the regional governments (Iran, Turkey, Saudi Arabia, Israel, Syria and Iraq, etc.) and thus, take their people away from that sinkhole, quickly. But the ruling party in Rojava, the PDD, and its military branches (YPG and YPJ) have run counter to this rule. Together with other nationalist parties in Kurdistan, they have made it part of their strategy and a very common thing to turn into an instrument for the imperialist powers and the governments of the region. This is a policy that has always caused massacres and displacement for the Kurdish people.

For many years the Middle East, has been the scene of war and bloodshed by the imperialist forces and the reactionary governments of the region. These infidelities, atrocities, genocides, and endless wars will continue unless there is at the scene, in one or more areas a powerful communist movement based on the real communism, the new communism, to lead masses of people “in another way, a leadership, qualitatively different, from what has been ruling in the region, for many years.  The people of the region must first unite in theory and then in practice against all the imperialists and the reactionaries of the region and their wars.

As the Communist Party of Iran (MLM) has emphasised in the draft constitution of the new Socialist Republic of Iran, one should only strive  for the communist revolution and build a society that:

“will serve as a base for the advancement of the world revolution and will show the people of the world through publicity and modeling that poverty and deprivation stemming from the old property relations, old thoughts, oppressive social relationships such as women’s oppression, economic domination, political and cultural domination, racism and the hegemony of nation over another nation, the destruction of the environment, monopolization of access to science and art by a handful  of people in society, forcing art and science to serve the capitalist system, banning the thinking and turning humans into submissive beings which are bolts  in the capitalist system , all will diminish by overthrowing the capitalist system, the establishment of socialism and the move to the establishment of a communist social system in the world.”

The Communist Party of Iran (MLM)