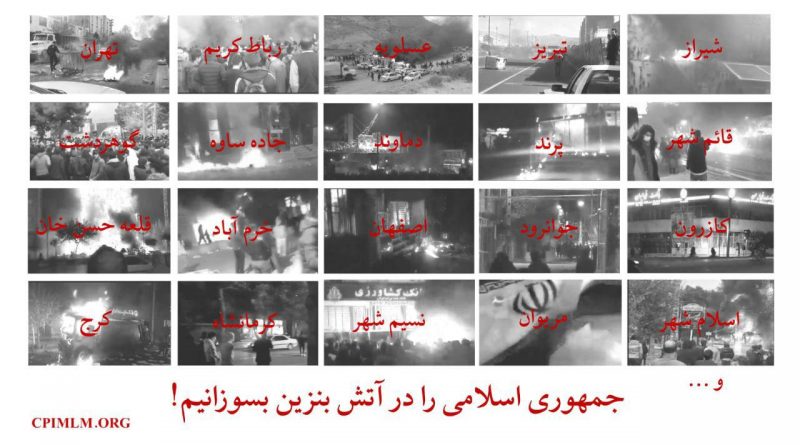 let’s burn down The Islamic Republic of Iran With the gas priced 3,000Tomans (per litter)!

Statement by the Communist Party of Iran (Marxist Leninist Maoist)

let’s burn down The Islamic Republic of Iran With  the gas priced 3,000Tomans (per litter)!

Statement by the Communist Party of Iran (Marxist Leninist Maoist)

The Government of the Islamic Republic (of Iran) announced that from the Friday, November 15th, the price of gas will increase 300%, meaning that the price of subsidised gas will jump to one 1,500 tomans per litter and the price of the open-market gas will jump to 3,000 tomans per litter. The 300 % rise in gas prices in Iran is a serious attack on the livelihoods of the people, particularly heavy burden on the back of the basic masses as well as the lower level of middle classes. Hundreds of thousands of households are making their living directly through transportation of goods by gasoline-powered vehicles, and it is unclear how they would be able to coop with this precipitous price hike. Fuel is an essential commodity whose price increase will lead to rising prices of other commodities and thus, increases inflation. The class polarization will widen up and the new wave of poverty, unemployment and displacement will follow. Many small businesses will sink and transportation of goods from villages to city and vice versa will be disrupted, and many will be forced to migrate from rural areas to the outskirts of cities.

Of course, some clergies of Friday prayers- such as Imami Kashani- have said the rise in gas prices should not necessarily lead to rise in prices of other goods in society! Ali Khamenei, the Supreme Leader of the Islamic Republic, has complained about the high consumption of gasoline in Iran and called for “conservation”.  Of course, this fatwa of the Iranian Supreme Leader does not include the expenses of increasing mobilization and deployment of police and armed forces of the Islamic Republic’s military to further suppressing the masses of people in Iran, or engagement in regional proxy and reactionary wars and murduring the Syrian people or Iraqi youth. In the very early minutes after the anouncment of the new gasoline price, thousands of armored personnel carriers and law enforcement units moved to the gas stations to prevent the possible people’s riots.

Hassan Rouhani’s government announced that the increase in gas prices was based on the agreement of the three pillars of power in Iran. That is, the totality of the capitalist dictatorship (bourgeoisie) of the Islamic Republic is fully behind this decision. This decision can be analyzed from several different angles:

First, the Rohani’s government Iranian government’s move to raising gas prices is part of a neoliberal project to reduce government subsidies and impose the cost of basic commodities such as bread, fuel, water and electricity on society and the people. This trend started by the end of Iran-Iraq war in Hashemi Rafsanjani’s government, continued in Khatami’s government, heightened in Ahmadinejad era by elimination of all subsidies, and now getting closer to its criminal completion under the Rohani’s government. The fundamental problem does not reside in the inadequacy of socio-economic plans or the “theft” character or the corruption of this or that Iranian government and its president. The world capitalist system has been able to pursue these policies in the last four decades, for various reasons  such  as, because of the economic and financial crisis, reducing  the risk of communist revolutions and other opposition movements and so on. A policy ( reduction or elimination of subsidies )that is one of the most important proposals of imperialist world capitalist institutions such as the International Monetary Fund, the World Bank and the World Trade Organization (Third World) and has so far brought  the lives of several billion people from Egypt, India, Mexico to Ghana and Romania and Chile to the brink of extreme poverty and despair .

But there are other reasons for the Iranian regime to come to this decision. The burden of the US sanctions on the Islamic Republic’s government, especially the restrictions on oil sales and international transactions will create a huge deficit in the government next year’s budget. To meet this deficit, the Iranian government is seeking new sources of revenue growth, and where is the more hanging fruit than attacking people’s pocket by imposing the additional expenses on people’s livelihoods? Meanwhile, the trillions of dollars expenses of the  Islamic Republic’s military, nuclear, missile, and war projects on top of the billions of dollars spent on promoting ignorance and religious superstition will continue to be looted by corrupt and degenerated Mullas princesse!

Prior to the announcement of the new petrol rate, all government media, a number of official and semi official spokpersons and defenders of the Islamic Republic launched an organized propaganda campaign to justify the recent decision of the Iranian government. Justifications such as “fuel and energy prices in Iran are still cheaper than many other countries around the world and the region” or “gasoline prices should be raised to prevent environmental damage and reduce pollution.”… In response to the propaganda of these charlatans  and supporters of the regime, we must say the Iranian capitalist government’s attack on people’s economic lives is not just about fuel…they have started their attack with rising the price of bread and fifty percent inflation in food, health and education.  Secondly, the income level of the majority of the Iranian people is even lower than many other countries in the region, and it cannot be concluded that “the prices of gasoline and mineral water now are the same”! Have it said,many people in the rural areas or villages of deprived areas have no access to tap water or even clean drinking water, nor to sanitation, education and not even receive adequare daily calorie intake . Thirdly, the concern for the environmental crisis by these relentless supporters of the government is nothing but false and making a face for the government’s criminal invasion to steal from the livelihood of the people. And they say so while they are mainly silent about the devastation of water systems,  deforestation,  land grabbing, constructions of high-rises and supper villas in various areas, constructing devastating dams  by the Revolutionray Guradian , Khamenei’s relatives , and  mafia-production and financial institutions such as Astan Quds Razavi, the Mostazafan Foundation ( religious foundations to extract money from people)  and testing  and maneuvering any  kinds of weapons by  their respected regime.

It is true that limiting fossil fuels, including gasoline, is one of the important strategies to reduce the growing trend of environmental degradation and emergencies crisis worldwide. But such a policy cannot be -actualised within the framework of the capitalist system and the mode of capitalist production worldwide, including in Iran. To achieve that, it requires diminishing the private ownership of the means of production and a capitalist economy that sacrifices everything in its path for the purpose of generating profit, including the human ecosystem. The elimination and reduction of fossil fuels- in a way that does not seriously harm people’s livelihoods and resolve this conflict properly and favorably for the majority of the population- is not possible within the framework of the capitalist system in Iran. Providing public transport, building the necessary infrastructure and a new urbanization system requires the establishment of a planned socialist economy whose purpose is not to make profit for a minority of people but to meet the needs of all peoples and to eradicate all forms of discrimination, exploitation and oppression in society and the world.

The establishment of such an economy is possible through the process of launching a movement for the communist revolution and the revolutionary overthrow of the Islamic Republic in order to establish the new socialist republic of Iran on the ruins of this regime. To launch such a movement and such a revolution, to break free from the deadly decisions and consequences of the capitalist economy, to end the suffering and suffocation caused by pove rty and pollution, to live in a healthy society that deserves all the people of the earth deserve to live in, there is no other way than to save the future of next generations of mankind except the communist revolution and the establishment of the new socialist republic.

In the draft constitution of the new socialist republic of Iran, our party wrote about the nature of such an economy and its relation to the needs of the people:

“The guiding principle of a socialist economy is direct social production, not the law of value (production and exchange of labor and labor exploitation) and profit. Direct social production means that production will be based on a direct assessment and evaluation of social needs (providing for the welfare of the people, the need to narrow social gaps and also meeting the needs of advancing the world revolution), not on the basis of profitability and compliance with the criteria of capitalist productivity. Economic development in this republic does not compete with a variety of private interests, and the socialist economy is capable of overcoming the devastating chaos of capitalist economics and enabling the conscious will of humans to govern economic development. ” [1]

But now what about the government’s policy of raising gas prices? The Islamic Republic was so scared of the possible uprising of people that announced its plan without any preview and warning but suddenly on the midnight of the Friday. So far, protests and burning of gas stations have been reported in several cities, including Isfahan, Ahvaz, Shiraz, Bushehr, Tehran, Bandar Abbas and Yasuj. This fight and the rage must grow. We should not stay silence in the face of the attack by the Islamic Republic against the people’s livelihood.  We should not allow the parasitic economy of capitalism and its beneficial rancorous looting Iran. We should not allow these entities that are organized into a vast network of public and private capitalists, army commanders, bureaucrats and ayatollahs, religious mafia and religious seminariescontinue their brutal attack on the lives and livelihoods of the people, especially the oppressed, the workers and the toilers. The response to such an offensive is now a widespread national movement whose specific aim is to pressure the government to halt the policy of raising the price of gasoline and expose corruption and plunder of all the leaders of the Islamic Republic, all commanders, banks and government institutions and financial institutions, and all public and private production and government depended institutions. This fight must go on in the context of a nationwide movement that our party has formulated in a document called “Seven Stops”. This document on the issue of poverty and economic misery of the people says:

“Work and housing mean the right to life. The Islamic Republic’s invasion of the right to life should not be tolerated. All the wealth accumulated in the hands of foundations, credit institutions, and banks, numerous mullahs, army and public and private corporations belongs to the people and are the fruits  of their hard work. The other side of the coin of embezzlement and robbery of various factions and figures of government…is poverty and hunger for many people, deprivation of working children from education and bankruptcy and misery. Poverty, hunger, unemployment and displacement of the poor people must be stopped”[۳].

Down with the Islamic Republic!

Towards the New Socialist Republic of Iran!