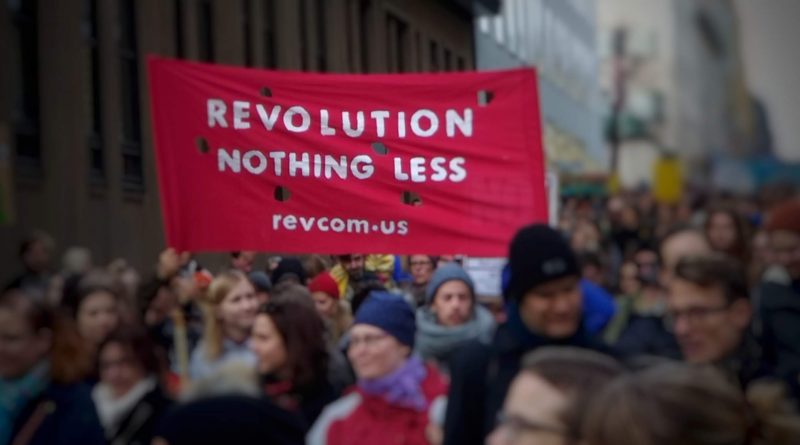 With New Communism, Raise the Flag of Internationalism

May first 2019 statement of the CPIMLM

When the history of May First was being written in streets of Chicago, USA in 1886, the workers of poverty and wage slavery were singing in the streets:

We want to overthrow everything

We are tired of toiling in vain

For the next day, without having even an hour to think

We are tired of all this

Since then, capitalism, dominating the whole world, has become capitalist-imperialist system. A small section of the workers in the capitalist imperialist countries have become workers aristocracy but great portion of people around the world have increasingly become proletarians who in fact work ‶to survive for the next day, even without having an hour to think‶. In 21st century we are witnessing that hundreds of millions being worked to death in sweatshops, factories, farms and service sectors. Capitalism with its anarchic and crisis producing workings has even made life for the middle class a matter of gambling without any predictable future in sight. Unbridled assault of capitalism is not limited to exploitation in the production point. Rather, in dialectical and intrinsic relations with production relations of exploitation and class divisions, the workings of capitalism produce/reproduce and enforce oppressive social fault-lines such as patriarchy, national oppression and huge divide between the dominated countries by imperialism and the imperialist capitalist countries. Environmental destruction is part and parcel of capitalisms metabolism and the masses all over the world, on an everyday basis, experience the destructive and murderous powers of environmental deterioration through floods, cyclones, draughts etc. And the scientists have declared that environmental destruction is reaching an alarming point that can bring about extinction of human race itself. Bloody history of world capitalism have demonstrated  that war and destruction is an inseparable part of the motion of capital for expansion and that dynamics of contention among big capitals striving for more profit and in order to push out their rivals, inevitably leads to wars. Capitalist states, in countries which are dominated by imperialismcountries such as Iran, Turkey, India, Iraq, Pakistan, Saudi Arabia, Guatemala , etc.–need to impose harsh political tyranny and violent suppression on the masses as well as spreading religious obscurantism in order to subdue and surrender the masses of people. But even the countries of ″liberal democracy″ impose securitizing and police atmosphere,  inquisition and thought prohibition on the masses in these countries. moreover, today a section of the ruling classes of the capitalist imperialist countries have resorted to fascism  as concentrated in racism, immigrant bashing and woman hating and religious bigotry– as a response to the crises which are produced by workings of their system itself. Not only a fascist regime has come to power in the USA but in the European countries these forces are growing in rapid rate and seizing the key institutions of power one by one.

So we can see that the majority of the people of the world need to overthrow the capitalist system and actually, can and should join a communist revolution for overthrowing this system. This revolution is a class war. But it is not just for the Proletarian class whose exploitation is the bone marrow of the capitalist system. Rather the goal of this revolution is human emancipation and the proletarian class itself will not be emancipated without the whole humanity emancipated.

In Iran, the first step in carrying out the communist revolution is to overthrow the Islamic Republic of Iran and to establish in its place a New Socialist Republic. With this revolution, we will overthrow the capitalist class and the Islamic state which is a guardian of that class and its interests. This class and its state, hand in hand and in partnership with the centers of world capitalism, enslave the production potentials and creativity of not only the workers but all other strata of the people in our society. After overthrowing this state power, we will establish a new state which will be a dictatorship of the proletariat. Then, using this new state power, we will set out to transform the economic base and all social relations and will organize a new social system on the basis of annihilation of all class distinctions, all production relations that produce class distinctions, all oppressive social relations and all old ideas which flows from and justify oppression and exploitation. And we will turn Iran into a socialist liberated base area for developing communist revolution in the world.

This is the only way to liberate ourselves and deal blows to expanding class divisions, unemployment and poverty, oppression and degradation of women, our children being wasted in mines and brick factories and sweatshops, oppression of non-Persian nationalities, super-exploitation of Afghani immigrants, destruction of environment, growing religious obscurantism and suppression of science and art, suppression of freedom of speech and liberty of thought and crushing the intellectuals who enlighten the people, and hundreds of other miseries that people are experiencing under the Islamic Republic rule today. Undoubtedly, this kind of revolution will pass through a hard road with lots of twist and turns. Reactionary and imperialist wars in the Middle East abound and have expanded continuously in the last several decades having led to destruction of number of countries such as Afghanistan, Iraq, Syria, and Yemen. This trajectory tells us that our revolution will take places amidst raging messy wars of all kinds. One of the basic documents of our party i.e. Strategy and Road to Revolution  puts forward the following approach and policy in the face of such eventuality:

‶… if the kind of wars we are witnessing in Libya and Syria and Iraq, happens in Iran, primarily and in a decisive way we have to expose the reactionary nature of all warlords (be it the forces of the Islamic Republic regime or the US and the forces organized and dependent on the US) to the masses of people — especially the youth. And on the basis of wining them over away from those reactionary and imperialist forces, should commit and organize them in efforts to initiate the revolutionary war against the reactionary wars. This kind of preparation against the reactionary wars, has to go on firstly and today mainly through political work and political-mental preparation. …‶

The document goes on to stress: ‶revolution must be carried out by conscious and organized masses under the leadership of the vanguard party. The strategy for a revolutionary war, has to be initiated relying on the masses and with a mass support and has to develop in such a way that its mass character develops continuously … Our strategic confidence in victory, has scientific basis. Because this regime and the ruling state and the imperialists have an essential weakness that they can never overcome: they are exploiters. This character does not change even when the masses wrongly follow them or the petite bourgeoisie resorts to political and ideological collaboration with the rulers and actually cooperates with them. This essential character cannot be reformed.  In contrast, we represent a future society within which the fundamental contradiction of capitalism which produces all present sufferings of humanity will have been destroyed.  Even those political forces that are not communist can unite with our program of communist revolution for a new Socialist Republic in Iran. Because, this revolution and establishment of socialism in Iran, will also benefit the petit bourgeois strata. The international allies of the Islamic Republic are the big, medium and small powers of the world who themselves are in antagonistic class relations with their people. But our international allies are the workers and toilers and women and oppressed peoples of the world and most importantly, the revolutionary communist forces and progressive people in the world who themselves aspire to change the world.‶

In the strategy of this revolution, internationalism is a decisive component — both for analyzing the situation and understanding the material conditions which influence development of revolutionary struggle as well as taking up the internationalist approach in preparing and advancing the revolution. The material basis of internationalism is development of capitalism into a world capitalist imperialist system. Every country and region of the world, are different levels of this international system. Even though, each of these levels has particular dynamics of its own and internal contradictions with relative autonomy but they are shaped decisively by the overall dynamics of this world system. Therefore, internationalism is not just a moral principle and any kind of moving away from the actual implications of this principle, will doom the revolution to failure. So, all communist revolutions in different countries must be led as a part of one single process of world revolution. In preparing the revolution in each country, internationalism is a fundamental point of departure and must have a significant role in changing the thinking of the people, in preparing the political terrain and in strengthening the communist vanguard party. Every revolution should be led by a communist vanguard party but on the basis of a universal communist theory. This theory was founded by Marx and Engels. It was developed in important aspect by Lenin and Mao making the great socialist revolutions of 20th century (first in Russia in 1917 and then in China in 1949) possible. Today this theory has made a critical developmental leap and has reached New Communism which makes even greater future victories possible. As a result of this developmental leap, today actually and objectively, the overall leadership of the single process of world revolution is embodied in the New Communism and Bob Avakian who has developed New Communism. Any party and group, in any part of the world who yearns to join the great march of new wave of communist revolutions in the world, must study and investigate the major documents of this science and the strategy flowing from it, and consciously take it up and define the program and path of revolution in each country they are to make revolution in and lead that revolution towards victory in practice. The basic documents of our party: the Manifesto and Program of Communist Revolution in Iran (۲۰۱۸); Strategy and Path of Revolution in Iran; Constitution of New Socialist Republic of Iran (a Draft Proposal) are corner stone and guide for leading this process in Iran.

Let us go back again to the birth of May First in 1886 in Chicago: on March 19 one of those workers in Chicago told The Worker — a German language paper published in the US–that: ″If we fail to prepare ourselves for a bloody revolution as soon as possible, we will not leave anything but poverty and enslavement to our children. So lets arm ourselves to make revolution.″ This is a call which rings so relevant and urgent today. Only one night before the May Day they wrote in their paper: ‶Dare to advance. The battle is on.  No compromise!″ and on May 3rd after a bloody suppression of their struggle, they wrote: ″Private Property is watered by blood. This is a historical fact.  You oppressed and slaves: wipe your tears and rise up to overthrow this whole system of plunder! ″

Down With Islamic Republic of Iran and the Capitalist Imperialist System